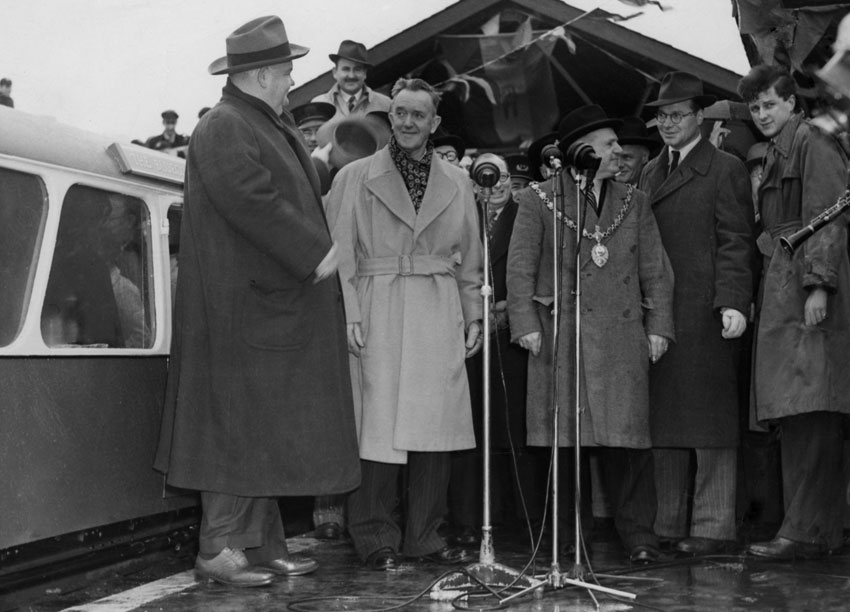 A young Ian Allan (far right)sharing centre stage with no less than Laurel and Hardy at the reopening of the Romney, Hythe and Dimchurch Railway in 1946

Having lost his leg at the age of 15 in 1937, Ian Allan began his working life two years later in the office of the General Manager of the Southern Railway at Waterloo Station, which allowed him to pursue his boyhood enthusiasm for railways.

Within a few months of joining, the Second World War began and Ian’s work planning advertisements for excursions had to stop and he was moved to the publications department, where he began to learn how to organise the print and production of the Southern Railway magazine.

Having had an all consuming interest in railway engines, locomotive classes and types of rolling stock, Ian was given the task of handling enquiries from the public. To do this he was given a notebook with the numbers of the Southern’s locos, their classes and their shed allocations. Realising that there was a keen interest in these names and numbers he made the suggestion that the company should publish the notebook. The suggestion was turned down and so permission was sought to publish his own booklet. This was given, subject to his doing so at his own risk and expense.

Needless to say, Ian took that risk, placed a small classified advert in Railway World Magazine, and very soon had nearly 2,000 one shilling postal orders, which after all expenses were paid, produced to his surprise an unexpected profit.

A reprint with the new title of ABC of Southern Locomotives was quickly ordered, with the author’s credit changed from I. Allan to Ian Allan.

The other three ‘Big Four’ Railway companies ( LMS, LNER and GW) followed. Soon the volume of orders was so much that dispatch of the books became too much to handle for Ian alone, so friends, colleagues and neighbours were enrolled to help satisfy the demand.

On one occasion, ignoring the advice of ‘experts’ Ian published a book on London Transport (the Underground, trolley buses, and buses). The 20,000 print run sold out in days. 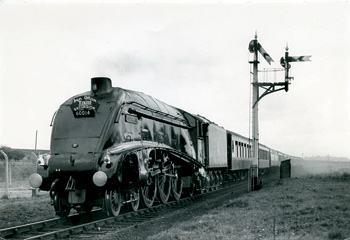 The books were attracting the attention of bookshops at railway stations and book chains such as W H Smiths. The success of the loco spotters books was assured and “train spotting” was born. In 1944 a group of school boy loco enthusiasts wandered on to the mainline track, an incident which made headlines in the national newspapers. A code of conduct was required and the Ian Allan Locospotters Club was formed, eventually attracting over 300,000 members the length and breadth of the country.

There were other transport publications about ships and civil aircraft, as well as hardback publications and now that the war had ended Ian Allan Ltd was incorporated in 1945 and started to operate from offices at 282 Vauxhall Bridge Road in London. Thus the publishing company was born and began to grow. In 1946 the first magazine was published – Trains Illustrated, followed by other magazine titles such as Locomotive Railway Magazine and Railway World. The organisation of numerous loco spotters’ excursions followed – a pointer to a new opportunity in the future.

In 1951 the company was prospering and to avoid the time and cost of commuting from Ian’s home in Staines to Waterloo, a building was purchased at Hampton Court and the company moved there. Profits were reinvested in printing machinery, which was operated from the basement of the new offices. This led to the creation of Ian Allan Printing Ltd in 1955.

Eventually the Hampton Court Offices became too small and Ian bought land at the end of the railway line at Shepperton and built new offices there.

A 1922 Pullman car was purchased as the Company’s board room. Previously used by King George VI, ‘Malaga’ now lies within the body of the Ian Allan Headquarters in Shepperton. Terminal House was completed in 1963.

Ian Allan Ltd had for a long time by now been organising railway excursions for the thousands of members of the Ian Allan Locospotters Club, and that provided an opportunity to build on that experience….. and start a travel agency!

Ian Allan Travel was quickly established and over a period of 24 years became a major Travel Agency chain in the South and West of England, culminating in the sale of its 35 branch offices in 1988. However the company retained its interest in the corporate travel arena, and remains a leading independent travel management company specialising in Corporate, Academic, and Charity Travel.

Railway publishing led to the chance to acquire a privately owned 7¼” gauge model railway, and having previously bought 56 acres of farmland at Lyne, near Chertsey, this became the home of the Greywood Central Railway, which was to be renamed the Great Cockcrow Railway ( www.cockcrow.co.uk ). Ian Allan (Miniature Railway Supplies) Ltd was conceived in order to provide equipment for commercial miniature railways nationwide. Soon there were 10¼” miniature railways at Bognor, Whitby, Bournemouth, Sandown, Prestatyn, Buxton and a second at Bognor’s famous Hotham Park.

As the Group expanded so more and more properties were acquired to house its various activities. To manage this ever increasing portfolio, the Group formed Ian Allan Developments Ltd (later to become Tennay Properties Ltd) to manage the company’s properties, leasing and licensing to third parties the premises no longer occupied by the groups operating companies.

Apart from being an enthusiastic member and supporter of the Shepperton Rotary Club, Ian had for some years been a freemason and when an opportunity came to acquire a specialist publishing company, A Lewis (Masonic) Ltd, Ian found it too tempting to turn down, and the company moved to Shepperton. Masonic publishing led to the manufacture of masonic regalia and expanded into military regalia both national and international.

In 1986 manufacturing premises were acquired at Hinckley in Leicester to produce all forms of Masonic, Police, military, corporate and club regalia items and the Ian Allan Regalia company was established.

Had Ian Allan not ‘chanced’ into publishing, he had always thought of becoming an Hotelier and in 1969 with a bit of money in the bank, he embarked into the hotel trade purchasing the picturesque Broadway Hotel in Broadway Worcestershire, closely followed by the Mansion House Hotel in Evesham. It was an interesting and “eventful” encounter into a very different type of business, and whilst the Evesham Hotel was sold on very quickly, the Broadway Hotel remained in the group until 1996.

The Shepperton Rotary Club connection also spawned the Group’s interest in the motor industry when, in 1976, a fellow Rotarian’s garage business failed. To aid his plight, the Group, together with another local company, Chase Organics, bought a small freehold garage site in Virginia Water. To cut along story short, ultimately Ian Allan Motors peaked at five garages distributing at various stages in its evolution Volvo, Land Rover, Peugeot, Saab, Subaru, Cadillac and Ssangyong new and used cars and after sales.

Oh, and by the way, in 1982 the Group also acquired Chase Organics, which quickly expanded its product offering of seaweed plant growth stimulants and organic seed retailing. Today it’s the home of the Organic Gardening Catalogue and is one of the leading organic seed retailers in the UK.

The development of Ian Allan Group was always described by Ian as “serendipity” – a happy circumstance of chance- but it is typically and inevitably the outcome of a great entrepreneurial spirit. Having identified the latent interest and enthusiasm for railways in the middle part of the twentieth century, and the small beginnings of a one shilling book of locomotive numbers in 1942, the Group evolved into a diverse portfolio of activities which, over the years, has encompassed publishing, printing, book and model shops, travel, garages, hotels, organics, regalia and property management.

The Group today has consolidated into four distinct trading companies, still run by family members, true to the ethos and tradition of its founder, Ian Allan.